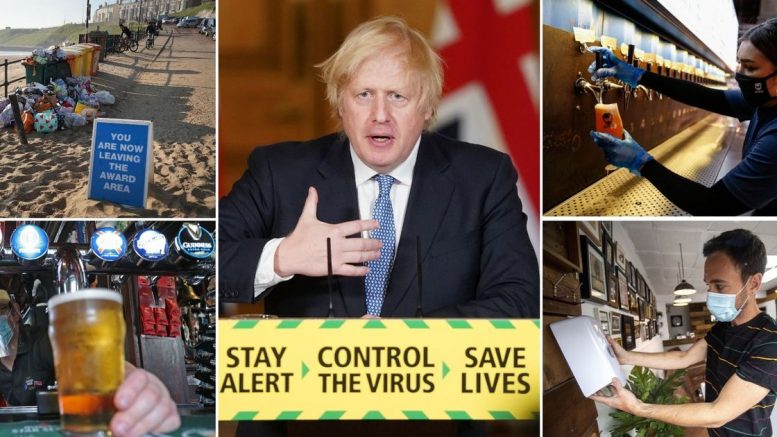 Prime Minister Boris Johnson has issued a blunt warning that coronavirus infections could shoot back up in winter.

And he said the Government was ready to impose tough local lockdowns on areas where the virus returns – including banning people from entering or leaving coronavirus hotspots, cutting off transport links and ordering people to stay in their homes.

Local councils will also receive new powers to close specific venues, including outdoor spaces such as parks, and to cancel events.

At the same time, the Government is to end the current advice to work from home from August 1 – in an effort to encourage people to return to workplaces.

Speaking at a Downing Street press conference, Mr Johnson said: “It’s possible that the virus will be more virulent in the winter months, and it’s certain that the NHS will face the usual annual winter pressures.”

But he said the UK knew more about the virus, and could now control it “through targetted local action”.

Announcing new powers for local councils, he said: “From tomorrow local authorities will have new powers in their areas. They will be able to close specific premises, shut public outdoor spaces and cancel events.”

But central government will also give itself new powers powers to impose tough local lockdowns.

Mr Johnson said: “I know it will be hard going for people affected by these local measures … but it has to be right that we take local action in response to local outbreaks”.

The Prime Minister confirmed plans to inject £3bn into the NHS, to prepare it for another outbreak. And he committed to a new target of reaching the capacity for 500,000 coronavirus tests a day by November.

It comes after a report commissioned by the Government’s chief scientific adviser, Sir Patrick Vallance, warned there could be 120,000 hospital deaths in a “reasonable worst-case scenario”.

Winter always places a great strain on the health service, but there are concerns a resurgence of the virus during the annual flu season could be crippling.

The pressure on the NHS is already higher in winter due to other seasonal illnesses, such as the flu, and it’s thought this will make people more vulnerable to infection with coronavirus.

In addition, people with flu may have symptoms similar to coronavirus, adding to demand for Covid-19 tests.

Mr Johnson is eager to get employees back to their workplaces if they are safe, following concern that high streets are suffering as office workers stay away.

The official Government advice is still currently to “work from home if you can”, but Mr Johnson said this would change from August 1.

But Sir Patrick, his top scientific adviser, showed some resistance to the change on Thursday, saying working from home remained a “perfectly good option” and there was “absolutely no reason” to change the advice.

Loved ones of alleged murder victim reveal their anguish