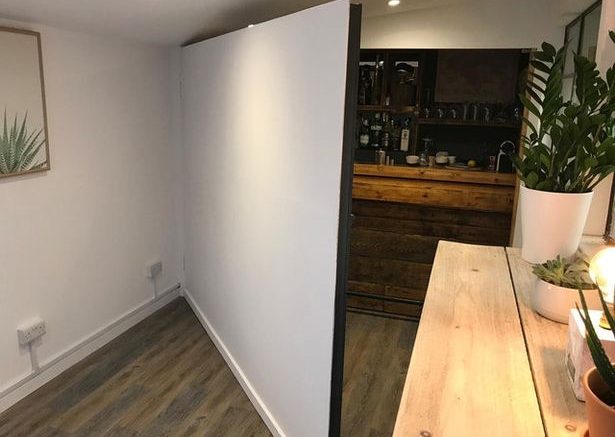 A married couple hand-built a secret speakeasy bar in their house – hidden behind a false wall – for just £500.

When Suzi and Tom Strover first moved into their home around eight years ago, they knew they wanted to do something with the “run down” outhouse at the bottom of the garden.

Then, in 2018, inspired by the Channel 4 show Amazing Spaces, fronted by Sunderland -born George Clarke, they had a brainwave – to create their very own hidden bar, building everything themselves, brick by brick.

Keen crafters, Suzi, 43, and Tom, 42 – who own a homeware store, Nadder and Wylye – made everything themselves, transforming the shack into a bright and airy yoga studio, complete with a false wall at the back, opening to reveal a secret drinking den.

Neatly fitting into just 75cm of space, the pintsized pub, called The Blind Pig – a nickname for illicit establishments selling alcohol during prohibition – may just be one of Britain’s smallest bars – following hot on the heels of The Little Prince in Margate, Kent, which measures 6.6ft by 11ft, has room for just six people at a time and is currently thought to be the UK’s tiniest pub.

Suzi, of Southbourne, Dorset, said: “Whenever people come round who don’t know about it, there’s always a ‘wow’ moment when we show them our bar. You’d never know it was there to look at the room, which is usually a yoga studio.”

She added: “We’ve tried to make it as lifelike as possible, so we have snacks like pork scratchings and peanuts behind the bar, while the spirits are arranged on a shelf with an LED light. We even put on this special recording that has all the background noises of a bar – chit chat, drinks being poured and glasses clinking.

“It’s been a godsend during lockdown. It’s given us that chance to have some escapism and feel like we’re getting away, when really, we’re only in the garden.”

Suzi and Tom, who have two children, Molly, 12, and Will, 10, have always been crafters and, alongside running their interiors shop, they love making furniture and keepsakes out of whatever materials they can find.

She continued: “Design is a hobby and passion for us both.

“Tom has made little vintage-style boxes to sell in our shop out of bits of scaffold he’s found out and about and I’ve made ornaments from driftwood.”

When they moved into their current home, the couple’s creative juices went into overdrive, as they wondered what to do with their outhouse.

Suzi said: “I wanted a yoga space, but we had also been watching a lot of George Clarke’s Amazing Spaces and started talking about how cool it would be to have a bar.

“To do both, we needed to find a way of separating the two – the bright, white studio and the dark and dingy bar.

“Tom is a bit of a wood hoarder, so he began looking through his stash and thinking of what he could do. He’s really creative, so it was good to have his eye.”

After lots of planning, the pair finally got to work in 2018, fitting the renovation around their day jobs and devoting every spare moment – including evenings and weekends – to their mammoth project.

“We did it all ourselves, so there are a few little imperfections here are there – but they’re what make it so quirky,” said Suzi.

“We gathered all sorts of materials to use. For example, a relative was replacing her windows with double glazed ones, so we took the old ones and did them up with paint from the shop.”

She added: “Tom has been collecting wood, insulation and bits of plaster for years to do crafty things with, so we had a lot to work with in the end. The whole thing only cost us about £500.”

Tom made the bar – big enough for approximately 12 people – completely by hand, fitting it onto castors, so it could be wheeled away and tucked neatly underneath a shelf.

Suzi continued: “The bar itself is just 75cm deep and tucks away under the back of the shelf, where we display all the alcohol. We did lots of little space-saving things like that.”

Suzi added: “Take the mirror in the yoga studio – it pulls down to become a table, and the store cupboards where I keep my workout equipment are also on castors, so they can be wheeled over to become a bench for guests to sit on.”

But the piece de resistance is the false wall, which pulls away to reveal the speakeasy in its full glory, thanks to some clever hidden hinges made by Tom.

After completing The Blind Pig at the end of 2018, the pair wasted no time in inviting guests over.

“We’re quite a sociable couple, so we love having people over to the bar,” said Suzi. “We’ve done gin and rum tastings there. It’s great to do the big reveal for people who don’t know what’s coming.”

Then, in March this year, keen for a new project as the Covid-19 outbreak meant they were unable to open their shop for customers, Suzi and Tom decided to make over the outside space attached to their bar, giving The Blind Pig its very own pub garden.

Again, they did everything themselves – although this time, Molly and Will helped, too.

The first step was to lay some concrete, before knocking up some decking, a table with a metal trough for ice to keep drinks cool and a kitchen area – all made from wood they had gathered over the years.

They then bought a barbecue, plus a projector and screen, making it possible for them to enjoy outdoor family movie nights.

Finally, tasteful décor was the finishing touch – including a stylish monochrome rug, several plants and a hanging chair, bought as a present by a relative during a trip to Goa, India.

In total, they estimate the renovation of the garden area cost around £2,000.

Now that lockdown restrictions are easing, the pair cannot wait to show off their hard work to their nearest and dearest – and Molly and Will are equally excited to have friends over to their very own garden paradise.

Tom said: “Because we have had to work around the materials we have rather than just building what we want, it’s been a bit of trial and error, but that’s all part of the fun.”

“It was really good for me, mentally, to have a project throughout lockdown. We weren’t able to work, but we were still out there every day – me making the furniture and Suzi doing the painting,” he continued. “The kids even got involved and helped us to lay the concrete.

“It’s been fantastic to have that little haven to go to. We have movie nights, and even watched coverage of old festivals over Glastonbury weekend outside with a cold beer. It was the next best thing to being there.

“Another time, we made a paella, got some cold rose wine and put on some Spanish music. It really did feel like we were away on holiday. Now, we can’t wait to show it off to everybody else.”