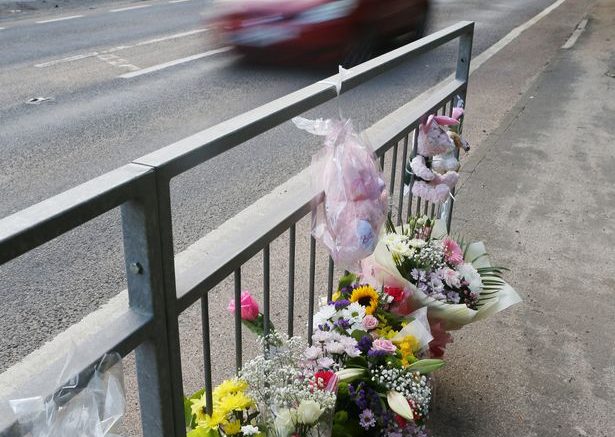 Bright bouquets of flowers and cuddly soft toys have been left at the side of the road after a three-year-old lost her life.

Teddy bears, a Piglet toy and a small cuddly dog have been tied to a barrier on the A1086 Coast Road to mark the loss of the little girl.

The tributes have been left beside the road which runs between Horden and Blackhall in County Durham, the scene of an horrific car and van crash on Wednesday afternoon.

The three-year-old girl, who has not yet been named, was a passenger in a Peugeot 206 when it collided with a van travelling in the opposite direction.

Although two air ambulances were scrambled to the scene as well as multiple ambulance crews, the young girl’s life could not be saved and she was pronounced dead in hospital.

A 17-year-old girl is also fighting for her life after being seriously injured in the head-on collision.

A total of seven people with significant injuries were taken to three separate hospitals in the aftermath of the crash.

After the death of the toddler was announced on Thursday, bunches of flowers and single roses were left near the road in her memory.

The touching tributes have been left close to where the road was closed off by police as a collision investigation took place.

The 40mph stretch of road reopened by Thursday morning and traffic could be seen passing by the roadside flowers and tokens of remembrance.

The fatal collision happened at about 2.30pm on Wednesday when a blue Peugeot 206, which was travelling from Blackhall Colliery towards Horden, collided with a silver van that was travelling in the opposite direction.

The Peugeot driver and other passengers all sustained serious injuries and were taken to hospital for treatment.

The driver of the van was taken to hospital with minor injuries.

Officers would now like to speak to anyone who witnessed the collision, or who saw the vehicles being driven in the area beforehand.

Anyone who may have dashcam footage of the vehicles is also asked to come forward.

Anyone with information is asked to call Durham Constabulary on 101, quoting incident number 207 of September 2.