A BEAUTY pageant queen who suffered serious burns as a child is set to compete in the Miss Universe GB contest.

Harriotte Lane, who lives in Newcastle, spilled boiling gravy on herself at the age of just 12.

She sustained deep burns to her thigh in the accident, and was forced to undergo five years of skin grafts and surgery.

The 21-year-old, who still has a large scar, told Chronicle Live: “I didn’t realise how severe the burn was.

“The skin on my leg started to peel off and it got infected.”

The gravy’s oil content made it act as a ‘fat burn’, which differs from an injury sustained by being scalded with hot water. 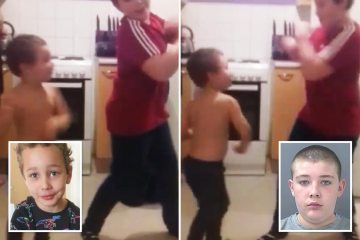 “For four days, it was burning through the tissue of my skin,” Harriotte said.

“I went to the doctors and they rushed me in for surgery the next day.

“I needed skin grafts and they took the skin from my upper thigh to place on my leg.

“It took five years to heal and there is still a scar there on my upper thigh.”

Harriotte’s mum Sarah Lane encouraged her to enter her first pageant, Miss Teen Great Britain, in a bid to build her confidence.

“I just wanted to hide away until my mum got me into pageants,” Harriotte said.

She went on to win Miss International UK 2019, as well as a number of other competitions.

Next month, she’ll compete for the Miss Universe GB title in South Wales.

During the final on July 9, Harriotte will model swimwear and an evening gown on stage and answer a question in front of the audience.

Participants will also have an interview with judges behind closed doors.

“Miss Universe GB is the biggest competition you can do in pageants,” Harriotte said.

“It has been a dream of mine from a young age to take part in it.”

The contest comes as she celebrates raising £100,000 for charity over the past nine years. She supports causes including A-Sisterhood, which helps women in India who have suffered acid attacks.

Harriotte also founded her own pageant coaching company at the age of 18.

She said judges look for contestants who are “personable”, rather than being impressed by looks.

“That’s the girl who walks away with the crown,” she said.

BENJAMIN SESKO’S agents have fuelled speculation of an imminent deal with Newcastle after an apparent trip to Tyneside. The Red Bull Salzburg starlet, 19, has been linked with a move to the Magpies, who are still looking for a new striker as top target and Reims star Hugo Ekitike has “agreed a deal in principle” […] The Sun Newcastle upon Tyne …

FIVE teenage boys have been found GUILTY of killing a hero dad, 35, who was beaten to death while trying to protect his girlfriend from the gang. Danny Humble, from Cramlington, near Newcastle, was murdered when he encountered the youths at an underpass, while walking home with his partner after a night out in May […] The Sun Newcastle upon Tyne …