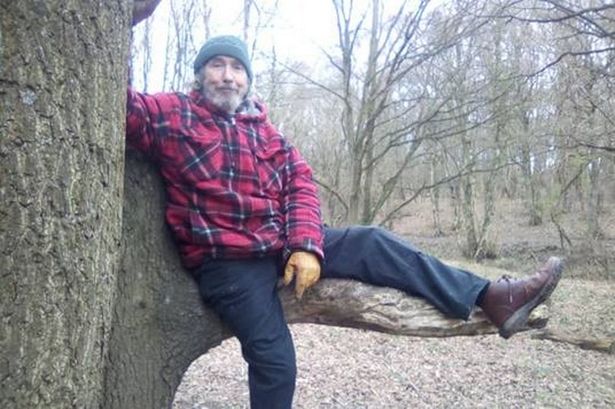 Still reeling from the shock death of her beloved dad, Toni Saint has made an emotional plea for help to find out what happened to him.

Fun-loving great-grandad Andrew Saint died in hospital weeks after he was allegedly assaulted.

The 64-year-old had gone to his local shop in the hours before the incident, which happened in Bedlington Station, Northumberland.

When Andrew – who was in poor health – did not come home, his family became worried and asked friends to help look for him

But the next time his loved ones saw him he was in hospital, hooked up a ventilator and in a coma. Andrew never regained consciousness and passed away almost three weeks later.

A 37-year-old has now appeared in court charged with his murder.

Today, as his devastated family pay tribute to him, they have made an emotional plea to their community to help police, who are still investigating his death.

And his wife Janice added: “We are hoping someone will come forward. I’m just in limbo now. It’s totally devastated us and his grandkids.”

Devoted family man Andrew lived with his wife Janice on the same street as Toni, who is a mum-of-two. He had worked at a scrapyard until around two years ago when he began suffering from health problems.

Andrew, who used a walking stick due to a blocked artery in his leg, had spent the day with his family before he was allegedly attacked on the evening of Sunday, February 23.

After having an afternoon nap he said he was going to go to the shop to buy some cheese.

“He always has his afternoon nap on a Sunday,” said 32-year-old Toni. “And that’s the last thing I can remember him doing.”

Toni became worried when her dad was not back after an hour.

“I asked my friend who drives to have a drive around and look for his car,” she explained. Toni’s friend spotted Andrew’s car quickly and saw that police had sealed off a nearby street, Pioneer Terrace.

The friend drove straight to Toni’s house followed by police who told her that her father was injured and on the way to the Royal Victoria Infirmary, in Newcastle.

Toni was taken to the hospital, where medics told her to prepare for the worst.

“When I got there a trauma nurse came out to explain,” she said. “She told us to expect the worst. They said he was seriously injured.”

For almost three weeks Toni spent every day at her father’s bedside.

“It was just horrible. Everybody had hoped he would recover,” she said. “The doctors were hopeful in the beginning. They were talking about different things they could do for him.

“But when I saw my dad that night I knew he wasn’t coming out of that. He was in a coma and he never woke up. I was in [to see him] every day until the very end.

Andrew passed away on March 13.

Paying tribute to her dad, Toni said: “He was loopy-loo, he was all for his family, he would do anything for anyone. He really would.”

And Janice, who was married to Andrew for almost 30 years, added: “He was a real character. There was nobody else like him anywhere. I just totally miss him.”

The case was sent to Newcastle Crown Court and the 37-year-old was remanded in custody until his next appearance on September 1.

He said detectives were still trying to piece together what happened to Andrew.

“We have been investigating exactly what has happened that night so we can establish what led to Andrew Saint suffering from what proved to be fatal injuries,” said Det Chief Insp Small.

“Those enquiries have led to Mr Rutherford being charged with murder. This has been a very difficult time for Andrew’s family who are understandably devastated by what has happened.

“Specially trained family liaison officers will offer them any support they need.

“Our enquiries will continue and we would ask that the public are mindful about the ongoing legal proceedings and respect the family’s privacy at this time.”

Anyone with any information should call Northumbria Police on 101, quoting reference 910 23/02/20.