The England stopper was the hero as he denied Luka Milivojevic, Jean-Philippe Mateta and Malcolm Ebiowei to hand Newcastle just their second win on penalties at the 12th attempt.

Bruno Guimaraes was handed the chance to win it for the Mags but skied well over after a stuttering run up.

Palace youngster Ebiowei then had to score but Pope flew to his right to win it 3-2 and send St James’ Park wild.

Newcastle are on the hunt for their first major trophy since the Fairs’ Cup in 1969.

But they made hard work of in in a terrible cup game, livened up only by Pope’s stunning stops at the perfect time just a few days before heading to Qatar. Boss Eddie Howe made eight changes after the weekend’s win at Southampton. 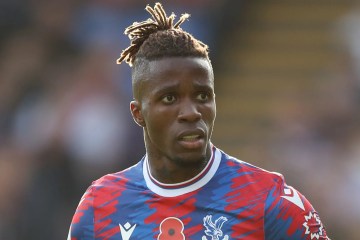 Nick Pope, Dan Burn and Sean Longstaff were the only players retained while Allan Saint-Maximin was back in from the off for the first time since August and young midfielder Elliot Anderson made his first home start.

Wilfried Zaha and Eberechi Eze were left out the Eagles squad, with six teenagers on the bench.

It was a club-record League Cup sell-out but a terrible spectacle soon sucked the life out of a packed St James’ Park.

Palace had the better of an instantly forgettable first half without causing many alarms.

Defender James Tomkins nodded an earlier corner over before striker Jean-Philippe Mateta had the best chance when played in by Will Hughes, firing a stinger straight at Toon stopper Nick Pope.

Reserve striker Chris Wood had Newcastle’s best opportunity within seconds of the restart but Sam Johnstone saved with his legs from a tight angle.

Saint-Maximin then whipped a great cross in screaming to be headed home but unmarked 6ft 7in Dan Burn spooned straight into the ground and harmlessly into Johnstone’s arms.

Toon needed a spark and the atmosphere ramped up 66 minutes in when star midfielder Bruno Guimaraes came off the bench.

Defenders Sven Botman and Kieran Trippier came on too yet it was Bruno, fresh from his Brazil World Cup call-up, who suddenly had Palace fretting.

The home side’s intensity shot up immediately, but with 15 minutes remaining, they were no closer to breaking the deadlock.

Howe had one more ace up his sleeve on the bench in the shape of pocket rocket Paraguayan Miguel Almiron, who has bagged seven goals in his last seven Prem games.

And his chance to win it came two minutes after coming on when Trippier played in him down that favourite right channel of his.

It’s pretty much a nailed-on goal when he opens up on to that trusty left peg these days, but this time Almiron’s effort was weak and straight at Johnstone.

Patrick Vieira’s side offered nothing in the second half, happy to roll the dice in a penalty shootout.

Pope’s stunning save to his left denied Luka Milivojevic after Wood got Newcastle off to the perfect start.

Will Hughes and Joel Ward then cancelled out Kieran Trippier and Joelinton before Johnstone saved from Botman.

Pope flew to his left to deny Mateta but Bruno, with the chance to win it, skied over.

Sub Ebiowei had to score to take it to sudden death but Pope was not for beating, diving to his right and palming away.