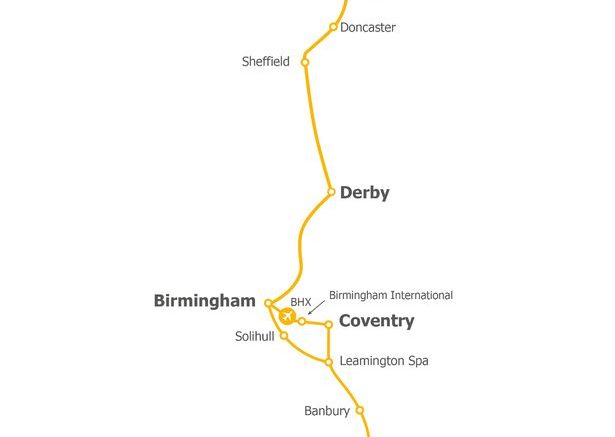 They include hourly, direct services to and from Newcastle, Durham and Darlington linking them to Coventry and Birmingham International, a station on the outskirts of Birmingham.

The proposals are backed by transport authorities in the Midlands – and one of the goals is to give people in the North East access to Birmingham Airport, which is next to Birmingham International train station.

Birmingham International station is also next to the National Exhibition Centre and Resorts World, and has regular services to central Birmingham.

Midlands Connect, a sub-national transport body, has submitted an initial business plan to the Government, and asked for £20m to develop detailed proposals. It says construction could begin in 2024.

The Government would need to agree to fund the scheme, which would cost between £125m and £180m.

It ties in with Boris Johnson’s plan to invest in infrastructure to “level up” the country, and to kickstart the economy following the coronavirus pandemic and lockdown. It’s part of a wider set of proposed rail projects know as Midlands Engine Rail.

Sir John Peace, chairman of Midlands Connect, said: “As we work to recover from the economic impacts of COVID-19; embarking on an ambitious and successful path post Brexit, our international connections and relationships with other UK regions will become more important than ever. Providing a step change in rail connectivity to the city of Coventry and Birmingham International railway station, our proposals will enhance access to Birmingham Airport, the West Midlands’ gateway to the world, as well as the nearby NEC, Resorts World and Jaguar Land Rover.”