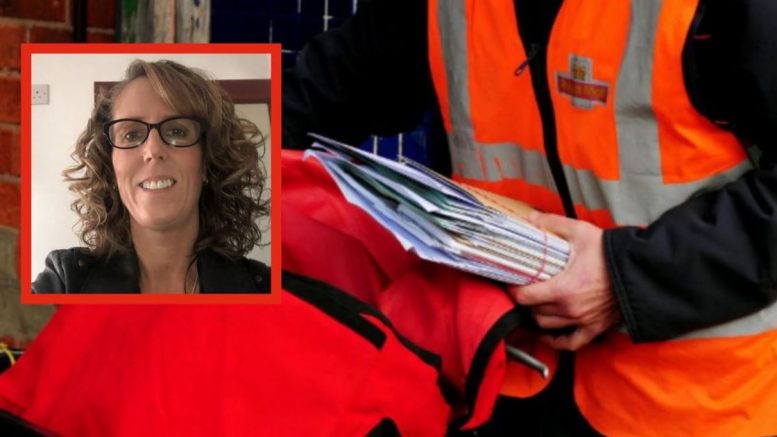 A County Durham postie was left with irreversible nerve damage after being attacked through a letterbox by a dog.

Angela Chapman, a postwoman of 13 years from Darlington, was unaware of a dog in the property and popped the mail into the letterbox, with the dog pulling the post through and biting three fingers.

Anglea, who can’t bend her fingers properly, is now warning owners to take steps to prevent their dogs from biting postal workers through letterboxes following a High Court ruling.

Anglea said: “My hand didn’t actually go through the letterbox when I posted the mail, but the dog instantly latched on to the letter and pulled my hand into the letterbox.

“It bit onto my three fingers and wouldn’t let go. The dog’s owner didn’t come to my aid, so I had to literally pull my hand out of the dog’s grip. I went into shock and some neighbours who had heard me screaming called an ambulance and I was taken to hospital.

“I suffered irreversible nerve damage to my ring finger and have been left with a permanent tingling in my finger that gets worse in the winter. Also, the scar tissue means I can’t bend my fingers properly.

“Even as a dog owner, I am very wary of strange dogs now. The attack still affects me now, eight years on. Even if the smallest of dogs looks as though it is going to approach me, I start shaking and sweating. A simple letterbox gate would have prevented this happening to me.”

Royal Mail is now warning dog owners to make letterboxes in their homes a ‘no-go zone’ for their pets.

The High Court ruled that dog owners who fail to take steps to prevent their dogs from biting postal workers fingers through a letterbox, whether the owners are at home or not, can be convicted of an offence contrary to the Dangerous Dogs Act and face a maximum of up to five years in prison

Changes to the legislation came after a case was brought to the High Court by Royal Mail.

The court ruled that the decision applies to postal workers or anyone lawfully visiting the premises, such as someone delivering a free newspaper or distributing leaflets.

The judge said that there will be a short time when someone exposes their fingers to a dog within the property.

If the dog injures that person, and the owner has allowed the dog to freely roam the house, the owner can be criminally liable.

The High Court ruling will effectively require dog owners to install letterbox cages or otherwise keep dogs away from the front door or face prosecution if injury is caused to a person delivering to the house.

In the event of a conviction the court must order destruction of the dog, unless the owner proves it is no longer a danger to the public. The court also has power to disqualify persons from owning dogs and order unlimited compensation to the victim.

Since 2013, over 650 postal workers have been attacked while posting mail through the letterbox – some cases have resulted in the loss of fingertips and even amputation.

Dr Shaun Davis, Royal Mail Group global director of safety, health, wellbeing and sustainability, said: “We know that the majority of dog owners are responsible and will do all they can to ensure their pet doesn’t harm anyone.

“However, even the most lovable dog can be a danger to postal staff. Dogs are territorial by nature and if they feel they need to protect their family, they can become unpredictable.”

In 2014, Royal Mail successfully lobbied for changes to the Dangerous Dog Act.

This amendment to legislation ensured that postmen and women were given legal protection if attacked by dogs when legitimately on private property, including a customer’s garden. Tougher penalties were also imposed for irresponsible dog owners.

Previously, legal protection following attacks by dogs did not extend ‘beyond the garden gate’.

This legal loophole was a particular issue for postmen and women, who each visit hundreds of private addresses every day on their delivery rounds.

Royal Mail took the action following a number of devastating injuries to its staff. There are more than 2000 attacks on postal workers every year. Over 150 of those attacks result in permanent and sometimes life changing injuries.

Woman, 24, dies of cancer holding boyfriend’s hand despite being told condition was curable