A RANDY couple were nicked after onlookers watched a woman perform a sex act on her lover in public.

Kerry Walker, 33, and Lee Martin, 40, were seen getting hot and heavy at the taxi rank outside of Central Station in Newcastle.

A commuter who saw the pair approached a member of staff at the station and told them it was “disgusting”.

Thirty minutes after their tryst, the couple left a homeless man with a cut to his eye after beating him as he slept outside the station.

Thug Martin woke him up and demanded money using threatening and offensive language.

Walker then hit the victim with his own bags as Martin dealt three to four punches to his face. 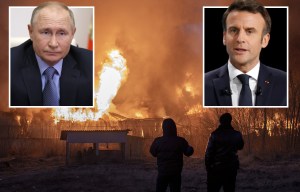 Prosecutor Glenn Gatland said: “Kerry Walker was on the ground on her knees with her face in Martin’s crotch area.

“It went on for around three minutes while members of the public and staff were in the area.”

It was heard the sexual act in question dragged on for three minutes in May last year – in full view of the public.

Martin, who has 70 previous convictions, also admitted to robbing Boots of £660 worth of make up in Newcastle city centre in October 2020.

He was jailed for five months on Monday, which was reduced for time already served in remand.

Walker, who has 164 convictions to her name so far, has already spent 292 days in remand.

She was handed a community order with an eight week curfew.