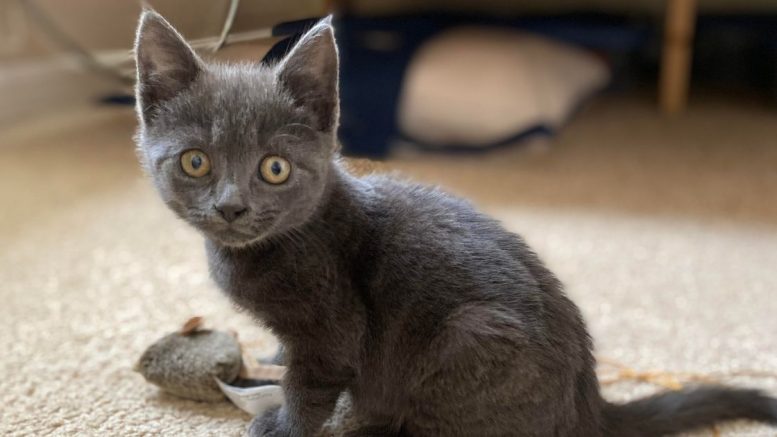 An eight-week old injured kitten had to be rescued by the RSPCA afte he was found lying on a Durham road.

The injured kitten was found on Commercial Street in Brandon with an injury to his right paw, unable to put weight on it and struggling to walk.

Fortunately, a member of the public found the kitten, who has since been named Dusty, and contacted the RSPCA immediately. Inspector Krissy Raine arrived and took the little kitten to the vets.

She said: “Dusty was lucky he was spotted when he was as he really needed help. Luckily, his paw isn’t broken but vets believe his injury could be nerve damage, possibly from a bite wound or maybe he was stuck in something and damaged his paw as he struggled free.

“This little fella isn’t microchipped so we haven’t been able to find an owner for him, or find out what happened to cause his injuries, unfortunately.

“He is now being fostered by my fellow inspector Clare Wilson while he recovers. The vets believe it could take around two months before he is back to full health and can walk properly again.

“However, despite his injury, he is starting to come out of his shell and has even started walking on his injured leg. He has lots of energy and will purr when he gets some fuss and loves playing with his toys, just like any other kitten.”

Once Dusty has recovered he will be available for rehoming through the RSPCA Cat Hub.

Dusty is one of 936 cats currently in the care of the RSPCA (as of 28 June), as the charity rescues more cats than any other pet.

Earlier, the RSPCA announced the UK is currently facing a cat overpopulation crisis.

The animal charity along with other cat and vet organisations believe the key to tackling this problem is neutering cats from four months old to avoid unexpected and unwanted litters which sadly end up in rescue centres.