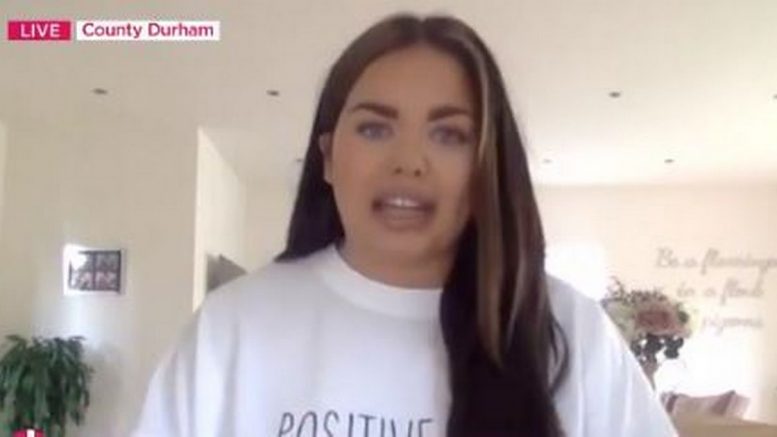 Scarlett Moffatt has been heralded by ITV viewers after a potentially life saving interview on Lorraine.

The former I’m A Celebrity champion and Gogglebox star appeared on the daytime show via video link from her County Durham home on Wednesday morning to speak to stand-in host Christine Lampard about the importance of women going for smear tests to to prevent cervical cancer and pick up on any abnormalities.

Earlier this month, Scarlett hosted a Q&A about smears on her Instagram to try and hit home how important it is not to ignore appointments.

The 29-year-old herself realised just how crucial they are for young women after she went for one last year and was told by doctors that she had ‘abnormal cells’.

Scarlett told Christine: “My journey is that I had abnormal cells, I have to go every six months rather than every three years.

“If they haven’t removed themselves by the next appointment, I will have to get them removed. If I hadn’t went, I don’t know what situation I would have been in.”

And then offering reassurance to women who may be put off from going to smears, or cervical screenings as they are also known, and trying to dispel some common fears about them, Scarlett added: “There’s stigma around it being scary, but it’s none of that.

“A lot of people don’t know you can request a woman to do the procedure, you can ask them to insert a smaller object too. My friends thought it was just to test cervical cancer, but it’s to also prevent cancer.

“You get asked to go when you’re 24 and a half, so maybe you haven’t had anyone look at that area. You don’t have to feel embarrassed.”

Scarlett came in from widespread praise from people at home who watched her interview.

One, who actually bit the bullet and booked a test after listening to her, tweeted: ” @ScarlettMoffatt thank you for talking about smear tests on #lorraine this morning and making them seem so normal. Thanks to you, I got brave and booked my smear!”

Another in a similar situation, reacted: ” @ScarlettMoffatt got my cervical screening letter last week and forgot all about it. Literally picked up the phone and booked the appointment while you were on the telly this morning. Thanks for doing what you’re doing,” and a third added: “THANK YOU @ScarlettMoffatt!It’s fairly quick, a little uncomfortable but it WILL save your life.It 100% saved mine & I will scream from the rooftops at how important it is to get yourself checked.”