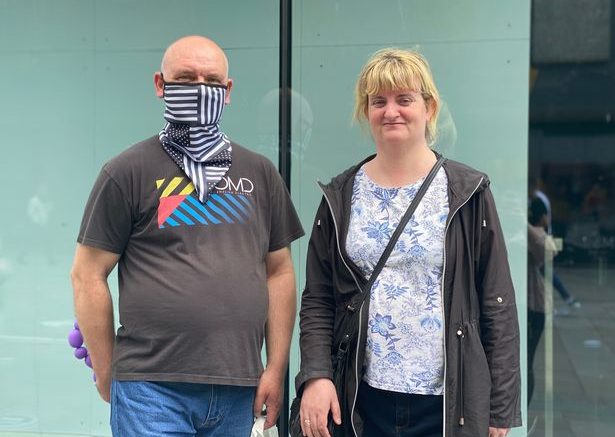 Face coverings have become compulsory for customers in shops in England under new laws.

Coverings are mandatory in enclosed public spaces such as supermarkets, indoor shopping centres and takeaways.

If people do not comply, they could be fined up to £100 by police.

Boris Johnson announced that the rule would come into force on July 24 to help prevent the spread of coronavirus.

But with the changes being introduced weeks after non-essential shops reopened to customers, the Government has received some criticism for enforcing the rule “too late” and delivering “mixed messages”.

Sales assistant Chloe Noble said it was “strange” to see people wearing masks while out shopping in Newcastle.

The 19-year-old, who is currently furloughed, said: “I believe this should have been a rule months ago, instead of holding off until now. It feels quite late.”

Chloe had been out shopping with her family on two occasions before the face mask rule was made mandatory and she said that she felt safe sticking to social distancing guidelines and using hand sanitiser regularly.

However, she is unsure whether wearing a face mask has made her feel safer while out shopping.

She added: “I’m not sure whether I feel safer, but I guess I feel like I’m protecting other people more, so that’s definitely an advantage of wearing a mask.”

Louise Emmerson and Kevin Bulley have found that some shoppers have not been abiding by the new guidance set out by the Government.

Louise said: “It’s a little bit late in the day to bring the rule in now. We’ve gone four months without wearing one. It should have been done from the beginning.

“Bringing the rule in now is just a bit confusing. I feel like we’ve had mixed messages when they should have been straight at the beginning.”

Kevin added: “All we’re doing is sticking by the rules that the Government have set out, but not everyone is sticking to it.

“We haven’t been wearing a mask before this. But when we heard we had to wear a mask we decided we should wear one. We don’t want to get pulled up in the shops for not wearing one.”

Life-long friends Margaret Ingram, 79, and Olive Elliott, 80, have been wearing masks when they visit the shops since the start of the pandemic.

And while they both admit that they dislike wearing face coverings, as they find it difficult to communicate with others, the pair are willing to wear a face mask to protect themselves and others from the virus.

Margaret said: “I’m going to do anything that is going to protect us. I want to live a long life so I think it is a good idea to wear face masks.”

Margaret hopes to see more people wearing the mask, adding: “I’m wearing a mask to protect people, so it’s time people did the same for us.

“Let’s not focus on how things have been dealt with in the past. Let’s do what we can now to protect ourselves. We can’t change the past, but we can protect the future.”

Drunk mum, 31, sank her teeth into woman’s nose in taxi queue row scarring victim for life but is spared jail