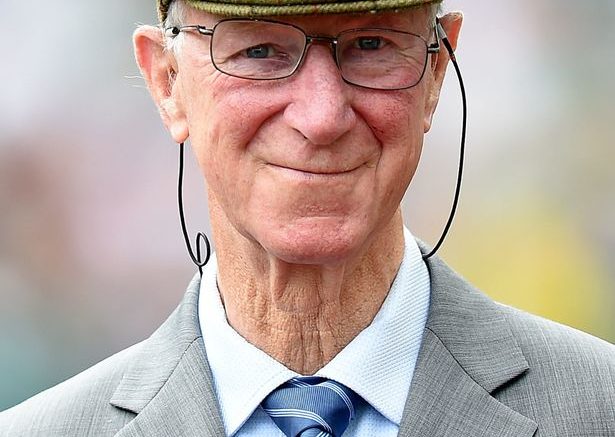 Northumberland World Cup hero Jack Charlton has died at the age of 85.

Tributes have flooded in for the “honest, kind, funny” father, grandfather and footballing legend.

Jackie, as he was affectionately known, helped England to their famous 1966 World Cup victory.

Alongside his brother Bobby, he was perhaps the most famous son of the town of Ashington, in Northumberland.

The skilled defender spent his entire playing career with Leeds United, from 1950 to 1973, and later became manager for the Republic of Ireland.

He died peacefully at his Northumberland home on Friday, his family said.

Tributes to the sporting legend have come from family and from across the footballing world.

His granddaughter, journalist Emma Wilkinson, tweeted: “Beyond sad to have to say goodbye to my beloved Grandad, Jack Charlton.

“He enriched so many lives through football, friendship and family.

“He was a kind, funny and thoroughly genuine man and our family will miss him enormously.”

One of English football’s most popular and larger-than-life characters, Jack had a short spell as manager for Newcastle United, in 1984, and also managed Middlesbrough and Sheffield Wednesday.

A spokesperson for NUFC on Saturday said: “We are deeply saddened to learn of the passing of former NUFC manager and England World Cup winner, Jack Charlton at the age of 85.

Leeds United tweeted that the club was “deeply saddened” to hear of “club legend” Jack’s death.

She said: “Jack was a great friend and a wonderful supporter of our cancer charity. He’d come out to events and meet with fundraisers, and people were always so thrilled to meet a World Cup winner.

“He had such a way about him. He’d just make us all smile. I feel for [Jack’s wife] Pat and the family after their great loss and they have our heartfelt sympathy.”

The England football team tweeted: “We are devastated by the news that Jack Charlton, a member of our World Cup-winning team of 1966, has passed away.

“Our deepest sympathies are with Jack’s family, friends and former clubs.”

And former England striker Gary Lineker said: “Saddened to hear that Jack Charlton has passed away. World Cup winner with England, manager of probably the best ever Ireland side and a wonderfully infectious personality to boot. RIP Jack.”

A family statement read: “Jack died peacefully on Friday, July 10 at the age of 85. He was at home in Northumberland, with his family by his side.

“As well as a friend to many, he was a much-adored husband, father, grandfather and great-grandfather.

“We cannot express how proud we are of the extraordinary life he led and the pleasure he brought to so many people in different countries and from all walks of life.

“He was a thoroughly honest, kind, funny and genuine man who always had time for people.

“His loss will leave a huge hole in all our lives but we are thankful for a lifetime of happy memories.”