Karting in Newcastle upon Tyne

For those in the North East looking for some exciting karting action on a split-level circuit within easy reach of the major towns look no further than F1Karting. The track is part of the F1K group who know a thing or two about putting on a good event and the go kart track is maintained to their usual high standards. Like some their other venues (Leicestershire and Heathrow especially) the track is on two levels with a 12 foot high second level and 150 foot bridge section, which gives an average lap time of around 35 seconds. F1K Indoor Go Karting is an adrenaline pumping motor racing experience for Corporate Entertaining, Stag and Hen parties, Team Building, School & Youth Group Outings and Charity Fundraising that’s suitable for adults and teenagers alike. Go Karts Go is an amusement park with go karts, a shop and video games. All members of the family, from three to 90 years, can have a fun time. The tracks are fully controlled and supervised with safety the key factor. Go Karts Go has the biggest four-stroke outdoor go kart track and the fastest four-stroke karts in the whole of Newcastle. Join Go Karts Go for a fun and exiting drive in their Go Karts and experience the thrill of race driving.

In 1998, Bob and Tracy Pope made the journey up north to take over Teesside Karting. This was after running a very successful international business that took endurance karting all over the world - as far afield as Brazil and Finland! Over the last 35 years, Bob has played a major role in the development of arrive and drive style karting as we know it today, opening the first indoor kart circuit in London in 1985. With his company, Playscape, he quickly expanded into a number of locations across central London. 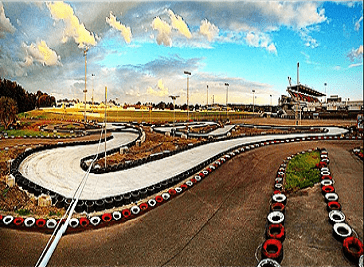 Your one stop shop for all your exhilarating karting needs! They are delighted to present you with the most definitive Karting Packages on the web and a truly fantastic array of Karting venues. They really have all the angles covered as they give you well researched and in-depth track descriptions.