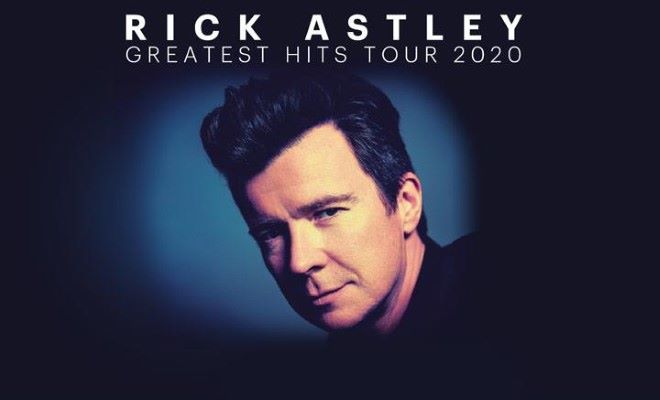 Rick Astley launched his current single ‘Every One Of Us’ in style. The track received its world exclusive first play courtesy of The Zoe Ball Breakfast Show on Radio 2, which he followed with a great performance on BBC1’s Saturday evening favourite ‘Pointless’. The track features on his career-spanning compilation ‘The Best Of Me’, which will be released on October 25th.

Rick Astley has proven to be a consistently huge draw in the live arena. He’s sold over 100,000 tickets to his UK headline shows since releasing his chart-topping album ‘50’ in 2016. This year has seen him complete a gargantuan 38-date stadium tour as special guest to Take That in which he played to over 500,000 people. Meanwhile, festivals have included a headline show at Kew The Music, plus the Isle of Wight, Pub in the Park and Chris Evans’ Carfest.

His shows are a celebration, mixing the famous hits that he made his name with alongside current fan favourites. Rick’s wide-ranging love of music means that his sets are often peppered with some inspired covers – as vintage as AC/DC’s ‘Highway To Hell’ and as contemporary as Calvin Harris and Rag ‘n’ Bone Man’s ‘Giant’.

At the age of 21, Rick Astley emerged from the shadows of the Stock, Aitken and Waterman production house to become one of the biggest stars on the planet. His era-defining classic ‘Never Gonna Give You Up’ topped charts the world over and catapulted him on a journey that would encompass 8 consecutive UK Top 10 hits and 40 million sales. And after stepping aside to focus on his family, he shot back to #1 almost 30 years later with his hit Platinum-selling album ‘50’.

Rick celebrates his extraordinary story with the release of ‘The Best of Me’. It charts that initial run of hits (‘Whenever You Need Somebody’, ‘Together Forever’ and many more) alongside recent fan favourites such as ‘Keep Singing’, ‘Angels On My Side’ and ‘Beautiful Life’. It also digs into some deep cuts too, such as ‘Lights Out’ from 2010.

The album is bookended with a step into the past and an eye to the future. Having written and produced the song as well as playing all of the instruments himself, opening track and lead single ‘Every One of Us’ is a brand new song that shows that the power of Rick Astley 2.0 is undiminished. And it closes with a new ‘Pianoforte’ take on ‘Never Gonna Give You Up’. Dropping the peppy ‘80s beats for an intimate piano arrangement captures it in a new light, its inner heartbreak becoming all the more apparent.

Continuing that spirit of reinvention, Rick independently recorded a set of ‘Reimagined’ interpretations of his songs, old and new, for the second disc of ‘The Best of Me’. While Rick’s musical style has evolved over the years, the ‘Reimagined’ recordings show that quality songwriting has always been an essential hallmark of his work.

Tickets are available online, from the booking hotline number 0844 493 6666 * or from 11.00am in person from the Utilita Arena Box Office. To book accessible seating, please call the Accessible Hotline on 0800 988 4440. Please note venue facility and booking fees will apply. Tickets are limited to 6 per person. *Calls cost 7p per minute plus your phone company’s access charge.

ℹ Please be aware that if you don’t buy your tickets from authorised outlets you run the risk of being refused entry to the venue or not getting any refund if the event is cancelled or postponed. If you are unsure of the legitimacy of a ticket outlet, we suggest you check the official artist or promoter website.

You can read more information on how to best buy tickets for events on our website: https://www.utilitaarena.co.uk/events/how-to-buy-tickets/

ARSENAL have been dealt a huge blow after Takehiro Tomiyasu went off injured against Newcastle on Monday night. The Gunners’ 3-0 loss to Tottenham last week has left them needing maximum points from their last two games to secure a Champions League spot. But the North Londoner’s cause wasn’t helped when Tomiyasu went down clutching […] The Sun Newcastle upon Tyne …