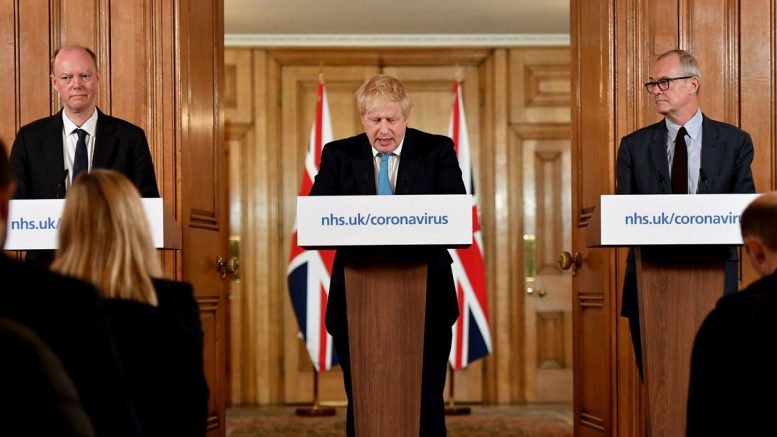 The Government’s top scientists are set to reveal the possible scenarios facing Britain this winter as the coronavirus pandemic reaches a “critical point”.

On Monday morning, Professor Chris Whitty, the Chief Medical Officer, and Sir Patrick Vallance, the Chief Scientific Adviser, will give a public briefing on the latest coronavirus data.

It comes amid rumblings of a second national lockdown as cases of the killer virus surge across the country.

Now, using charts and graphs, the Government scientists are expected to present data on other countries who are experiencing a second wave to highlight the grim trajectory possibly facing the UK.

Countries such as Spain and France and suffering a deadly second wave, and experts have warned Britain may just be weeks away from following them unless quick action is taken.

And on Monday morning, the Chief Medical Officer is expected to tell the nation that the “UK is heading in the wrong direction” and that a “very challenging winter period” awaits Brits unless something is done to control the levels.

It comes as another 3,899 infections were recorded nationally on Sunday, with 18 more deaths announced.

There are fears though that the real number of daily infections is much higher due to the ongoing testing fiasco.

On Sunday, Alice Wiseman, Gateshead Council’s Director of Public Health, tweeted: “We think there will be many missed from the numbers because they can’t get a test.”

And the soaring number of cases has left the Prime Minister pondering possible new nationwide restrictions.

He reportedly met his top medical experts over the weekend to drum up plans as to how the UK will fight the virus over the colder months.

And while he is reluctant to implement an economically crippling full national lockdown again, he admitted on Friday that the UK is “now seeing a second wave”, adding: “It’s been inevitable we’d see it in this country.”

Monday’s briefing is expected to begin at 11am and will be broadcast live. We will be bringing you live updates as it happens.