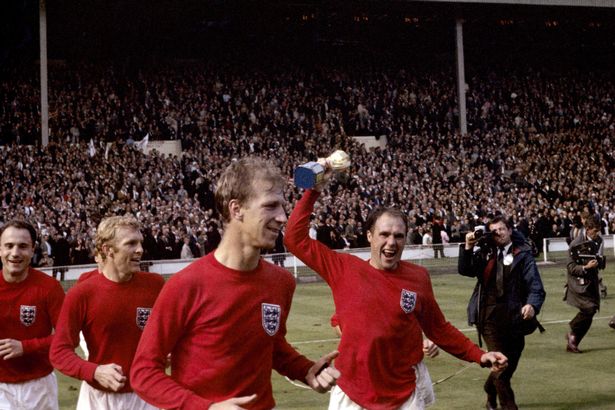 A major tribute to Jack Charlton will take place in Ashington on the day of his funeral.

The World Cup winner died at home aged 85 last Friday and his passing sparked tributes from around the world.

The surviving Charlton brothers will be reunited for the first time in years at Jack’s funeral, amid a clamour for the World Cup winner to be knighted.

Sir Bobby, 82, Gordon, 77, and Tommy, 74, will gather for a ceremony that would have been attended by a line-up of football legends if not for the pandemic.

But the coronavirus restrictions mean that only about 20 close relatives will be allowed into next Tuesday’s service to say a final farewell to Big Jack, who died peacefully at the age of 85 last Friday.

Fans will, however, be given the chance to pay tribute as the funeral cortege passes through his home town of Ashington, Northumberland.

And plans are under way to line the streets to give the local legend a final send off.

It will travel along streets where he and Bobby used to play before becoming the world’s most famous football brothers.

There will be a stop at Hurst Park, where the pair loved a kickaround as boys, close to their old terrace house at 114 Beatrice Street.

His family received condolences from across the globe, from Tasmania to the Cayman Islands, and above all Ireland, following Jack’s death at 85 on Friday.

His son John, 61, and his Dublin-born wife Deirdre, 44, told how countless fans were touched by his time as Republic of Ireland manager 30 years ago.

Many backed the Mirror’s call to give Jack a posthumous knighthood. John feels not just his dad but all the heroes of 1966 should have received the honour. “It should have been done more than 50 years ago really,” he said.

“It is very unfair because it was the first time England had won a World Cup. You cannot beat that because football is our national sport.

“Yet we have seen other champions receive the knighthood straight away; the 66 team was recognised by everyone for their achievements – apart from the establishment.”

Jack died as he had lived – with his loving family close by.

He saw his grandchildren, gave John one last thumbs up, and passed away peacefully with his wife of 62 years Pat, 85, daughter Deborah Wilkinson, 57, and son Peter, 53, by his side.

“It was just like dad,” said John. “He had a play with his grandchildren on Thursday night, but did not sleep well. He was at home in bed.

“On Friday, he opened his eyes, then closed them and was gone, it was very peaceful and typical of him, a good way to go, surrounded by his family.

“He had an amazing life and left great memories. Some will remember him as a World Cup winner; in that great Leeds United side; or as Republic of Ireland manager. That time was not just about football.

“Niall Quinn says it kick started the peace process, people in Ireland looked beyond the troubles. It brought them so much joy. We are so lucky as a family.

“We are so lucky as a family. His grandkids will always be able to look at all the photos of him, the TV coverage, and read the reports of what he did. Not many people have that.”

As they sat at his bedside in his final hours, his children remarked on how little their dad had changed down the years, a towering figure whose mischievous smile won him an army of fans.

“He did not look that different from his 20s,” added John, of Ponteland, who runs Charlton’s Bar in Cambois, close to where his dad was born and brought up in Northumberland.

Sign up for the latest news straight to your inbox

We send a range of newsletters each day – sometimes twice a day – on the latest news, up to the minute breaking stories, information on coronavirus and the latest Newcastle United and Sunderland AFC football stories.

“His hair has receded, but it was like that way back.

“People would run to meet him when he was abroad. They recognised him everywhere. He never refused an autograph, and would always stop for a chat.

“Even in the last six months people would put babies in his arms, he posed for photos with kids who had no idea who he was when their parents asked.

“He made so many people happy.

“What made him special was that he did the very best with what he had, he may not have been the smartest bloke, but there was something in his nature which just made him a very likeable character.

“We have been overwhelmed by the tributes from people not just in this country and Ireland, but around the world.”

His father was diagnosed with lymphoma in November. The decision was made not to treat it because of his age.

He had struggled with dementia in later years, though John remains unconvinced that it was caused by heading the ball during his football career.

Ian Lavery, Labour MP for Wansbeck, is backing our crusade for Jack to be given a knighthood, backed by his family and countless players, fans and celebrities.

The rules would have to be changed to allow the honour to be awarded posthumously.

Two events in celebration of Jack’s life, in England and Ireland, are likely to be held once the coronavirus restrictions are lifted, and will raise funds for lymphoma and dementia research.

His funeral takes place on Tuesday, July 21 at 11.45 at the West Road Crematorium, Newcastle. The cortege will leave the family home in Dalton, near Newcastle at around 9am to pass through the streets of Ashington.

It will meet a police escort there at around 10am before going along Newbiggin Road, turn right onto North Seaton Road, into the town centre on Woodhorn Road, before turning down Alexander Road, with a stop outside Hurst Park Welfare where he played as a child.

It will take the same journey back, then down the A1 to the crematorium. The family is making details of his funeral public so people can pay tribute – while observing social distancing guidelines.