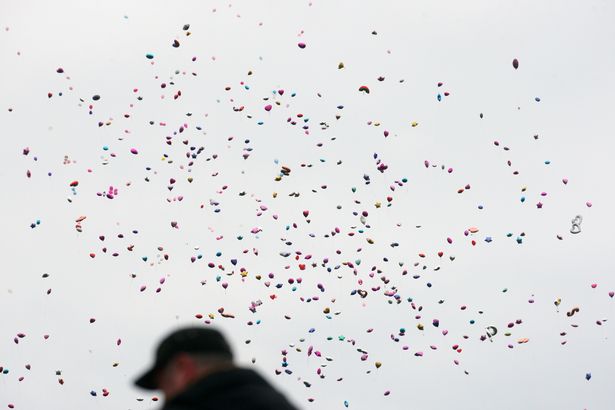 Hundreds of mourners gathered by the shore in North Shields to pay tribute to a “beautiful” teenage girl who was found dead after going missing earlier this week.

A sea of colourful balloons were released into the sky in memory of Seesha Dack, whose body was discovered close to Tanners’ Bank in the town on Tuesday evening following an extensive search.

Mourners wiped away tears as the balloons floated out of sight, while fireworks were also let off on the beach in celebration of Seesha’s life.

Applause rang out as family and friends thanked those who had attended to pay their respects.

Those who helped with the search for Seesha had also been invited to join them at 5.30pm.

It comes after a fundraiser was set up to support her family who are struggling to come to terms with her death.

A widespread search was sparked after Seesha went missing on Sunday after last being seen near the Fish Quay.

The police boat and helicopter were deployed on Tuesday morning and officers were also conducting land searches in derelict buildings and outhouses.

Tanners’ Bank was cordoned off under the railway bridge at the A193 junction from around 6.30pm on Tuesday evening as a number of police officers arrived on the scene.

Police later confirmed they had found a body in the search for the missing teenager.

Northumbria Police say her death is not being treated as suspicious.

Flowers and cards have been left at the side of the road where the police cordon was in place in tribute to the 15-year-old.

One reads: “Seesha, you’re the most gorgeous star in the sky. I can’t believe you’ve left the world. We love you. You were too good for this world. You’re going to be missed.”

Tributes have also flooded in on social media for Seesha, whose disappearance had been described as “out of character”.

Jan said: “Oh my goodness, rest in eternal peace sweetheart. Fly high with the angels, but if possible stay close to your mum. She is bewildered and loves you beyond life always show her signs you’re here with her.”

Tara Krystal said: “My thoughts go out to family and friends hearing this news. It’s just horrible what a loving girl whose life been taking away so soon.”

Kayleigh Simpson added: “Heartbreaking, what a beautiful girl took too soon. Thinking of all the family and especially her mam, couldn’t imagine the pain. So sorry.”

To donate, go to https://uk.gofundme.com/f/help-seesha-dacks-family-at-such-a-hard-time